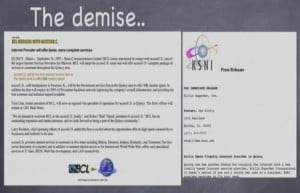 Kevin Nassery: So, how did this stuff end up? Really, it just got sold. BCL got acquired by Access US. Most of the system staff eventually left and they migrated off those systems. I do recall once sitting at a table and Dop logging into an Access US with root and fixing something for his Dad. There was some of that stuff, but largely we just moved on to other stuff.

Cane kind of handled the technical stuff at the ISP which I mentioned, which I started working at; and I assume there was a lot of the same stuff going on against me. But overall it was a pretty good learning experience for everyone involved. 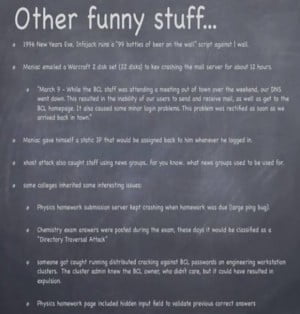 A couple of other funny stuff that I remember happening, not necessarily hacks. On 1996 New Year’s Eve, Infojack just started running a script that was a “99 bottles of beer on the wall”, so everybody basically got 100 messages, 1 every minute. You go back to your journal, and it’s just a spew of crap of him. He was a pretty funny guy.

I didn’t play Warcraft at the time, and maniac once said: “Oh, it’s the best game!” And I’m like: “Ok, maybe you can give me a copy of it on floppies.” And he’s like: “I’ll just email it to you.” So, Warcraft 2 I think was, like, 17 1.4 high-density floppies, and he email-attached all these floppies to me. The mail server at the time – you know, 32-40Mb – you didn’t have it. And it ended up crashing the mail server, coincidentally while the staff was all in Springfield, Illinois, two and a half hours away. I was on the Internet Archive site and I caught the status message for what happened; that was March 9, 1997: “While the BCL staff was attending a meeting out of town over the weekend, our DNS went down. This resulted in the inability of our users to send and receive mail, as well as get to the BCL homepage. It also caused some minor login problems. This problem was rectified as soon as we arrived back in town.” It was rectified by ‘rm-ing’ my mail’s pool.

Mike “Dop” Dopheide: And along the maintenance of the dial-up pool, maniac decided: “This was ridiculous. I’m just gonna give myself a static IP and make sure that that’s assigned back to me whenever I dial-up.”

Kevin Nassery: Yeah, we used to have static IPs, and when they upgraded to the MACH 4000’s they only let us have dynamic. So he gave himself back his static IP.

Mike “Dop” Dopheide: And if you wouldn’t happen to be logged in on that IP, that just got kicked out.

Kevin Nassery: It wasn’t just like a sign-in IP in the RADIUS pool, he actually had to also install a route on the default gateway for that IP back to the terminal server he was on dynamically. So it was pretty elaborate.

So, after all this stuff went away, just coincidentally, colleges started to have some interesting issues.

Mike “Dop” Dopheide: Yeah. I think it was 1997; pretty much all UNIX machines had a problem where you would send a very large ping packet and the kernel couldn’t handle it, and this crashed the machine. There was a situation where you’re doing physics homework late at night, on the day before it’s due, and everything is really-really slow, you couldn’t get the answers back because all the students were hitting the machine. But if the machine dies, it’s someone else that’s going to complain about that. And then they extend the deadline for the homework. That might have happened…

Some of this stuff still happens today, the “directory traversal attacks”. A friend of mine would come back from the chemistry exams pretty early. I think he didn’t really care. As soon as he got back to his apartment, the exam’s answers were already posted. I was wondering how he could put that up there sooner than that. So we started guessing the names of these files and realized they were being placed out there before the exam actually started, so you could just go to that website, write down all the answers and then go to your test. Just because they named it, you know, “fall98.html”, it just didn’t link to it. So that was pretty fun.

Kevin was talking about being able to grab the BCL password off YP. Someone might have run a password cracker on the engineering workstation cluster at some campuses, which was noticed. But the campus cluster admin was also a friend of cane’s. He just called him, and cane is like: “Oh yeah, I don’t care about that.” So he didn’t really get in trouble, though he could have got expelled for that.

Another thing had to do with the same physics department, it was not that great. You hit web-based homework situation, you get one answer right on a page. You usually have eight or ten answers, like, multiple choice things that get progressively harder. And the first one is like “true / false”, it’s really easy. You get one right, you get a little star next to it – and it creates a hidden input field in the HTML, so that when you resubmit that page it says: “Oh yeah, you got that one right, we’ll just go on.” But you could just copy that for all of the other ones, get one right, and then recreate the static source page, click that one, and then get all the correct answers on that page. I don’t think they ever knew that.

Kevin Nassery: Yeah, OPSEC is probably a more useful skill than physics. So, does anybody have any questions? Otherwise we can also kind of turn off the cameras, and if anybody has any story about late, early, mid-90s stuff that they want to share – you’re welcome to share as well. Alright, thanks!