Youthful Exploits of an Early ISP by “Dop” and “KevNr”

Hi! I’m Kevin Nassery; this is Mike “Dop” Dopheide. We’ve been friends for about 15 years, we actually work together now; and we are going to kind of talk about how Dop and I got to know each other a little bit. 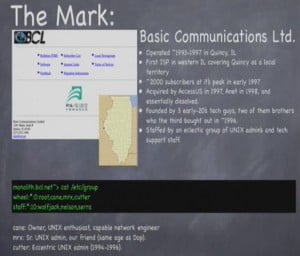 We grew up in the same town – Quincy, Illinois. We have a map there (see right-hand image), but as I like to describe it, if you’re a chubby guy facing California, it’s the belly button of Illinois. And this analogy also is great because East St. Louis is the balls of Illinois.

Basic Communications Ltd. was very similar to probably a lot of your first ISPs. Previous to that, I had been using a lot of dial-up. I’ll go back to our pictures for a second. This is Dop, maybe a little bit younger than he was in some of this stuff. And this is me, pretty much at this time.

Early ISP used POTS dialing lines, initially kind of 24 then 48 POTS dialing lines – we’ll talk about the architecture a little bit. It was serving at its peak about 1500 people. As you can tell, Quincy is not necessarily a suburban area, but between St. Louis and Springfield, Illinois, it’s about the biggest town around. So it was kind of the hub for this. And actually, in talking to other people from early years, I think Quincy had the advantage of having some people that were pretty interested in computers and kind of an early start on this stuff. I think BCL probably was founded in 1993-1994; I became a registered user in 1995, and Dop – around the same time. And we came before that dialing into Chamber of Commerce, BBS’s, stuff like that. This was our first real Internet connection.

It was eventually acquired by Access US in 1997-1998, and we’ll talk a little bit about what happened after some of this stuff. It was founded by three early-20s tech guys who had gone to college, come back home, didn’t know what they wanted to do. Two of them were brothers, and one of them – just a partner in enterprise. And eventually the brothers got kind of pushed out. Cane here bought the ISP out from under them and then operated it independently as a sole proprietorship after that.

It was staffed by a pretty eclectic group of guys, both in the kind of staff admin side, one of which was our friend who was kind of the same age, he was 17 or 18. So, the wheel group here – we’ll talk about the owner; our friend was mrx who was a 5’2, 120 pound guy with a ponytail hanging down to his butt; and he was a really eccentric UNIX admin – there’s one story that kind of hones in on that.

But the first time I really met him, I went to the user group for Perl UNIX, I couldn’t really tell what was going on: it looked like he was IRCing, but what he had done is he was using the Emacs shell interface to bring up kind of a raw socket to an IRC server. And he was actually using Emacs as an IRC client, but he didn’t have the benefit of an IRC client’s ability to auto-respond to CTCP pings or something like that, so he would actually manually have to send the ping response back to the channel and was basically speaking the raw protocol. So, that was kind of really cool and weird, but then he also does crazy other things. He was more concerned probably with the coolness of what he thought he was doing than necessarily always the right classical UNIX thing to do.

There was other staff there that wasn’t in the wheel group, and Dop has got a story about one of those too.

All of this stuff is kind of long-lashed otherwise we wouldn’t be talking about it. It was kind of a different world back then, more to the point that some of it might actually have felt like a bigger deal back then than it would now, just because there was no pursuit of any type of cybercrime. 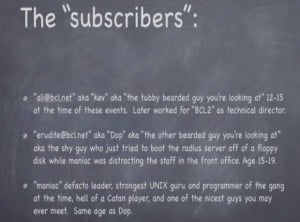 Just two days ago, mrx called me about some job advice, and we’re still friends with cane as well. And I actually ended up working for an ISP with these guys later on, so none of this stuff really matters anymore, so we wanted to kind of talk about it in the spirit of the old school Notacon stuff.

Dop and I are here today, giving the talk. Somebody who’s still a good friend of ours and works probably 60 feet from Dop in another office where he’s at – he was probably the strongest UNIX programmer among us and was a little bit more bold than me. And I was a little bit younger than both Dop and him. So, there’s me; I was 12-13-14 when this stuff happened. Dop was a little bit older than me, and maniac was Dop’s age. 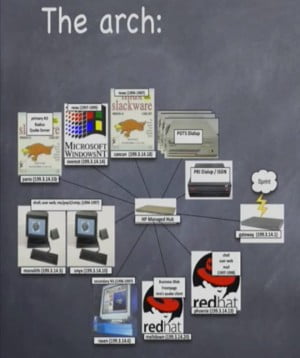 So, what did this ISP look like? It looked like a lot of early ISPs, and that’s to say, not much by today’s standards (see image). There was a pretty eccentric group of multiple UNIX systems which made it a really great train set for us and the people that owned it, meaning we got to see how different types of UNIXes did different things. There were two principal NeXTSTEP boxes; they were Turbo Color slabs. Those were, like, 33 MHz width boxes with 32 MB of RAM at the time.

There was a SUI Indy running IREX 5 or another. A couple just starting to get into the Linux servers had one slacker box, and they later on kind of managed some Linux box and replace some of this aging commercial UNIX stuff with that.

The original dialing infrastructure, I said was about 48, and eventually 96 POTS lines. And actually, cane, the owner of the ISP, I recall, once complained that he only got one phonebook because he owned 96 lines; and at the time, phonebooks were actually useful. It was kind of weird. And it was the coolest setup of all time, because all the modem rack was is a whole bunch of USRobotics Sportster Modems, and he had bought aftermarket chassis for them to be able to pull them out of the external modem shell and then rackmount them, and it provided power and kind of a rack management solution for having 60 modems in a rack. And these Telebit NetBlazers were just serial terminal servers, they supported RADIUS. Initially they weren’t using RADIUS, and then eventually they did use RADIUS for dialing authentication, but there was a read-only password file on each one of them.

There were Intel boxes like i386, probably 386SX boxes. They booted off of a floppy with their own OS, and it was essentially just a serial line. Terminal server in it did have the capability to run SLIP and PPP.

Most of the users started off having shell access that they could initiate point to point, PPP connection’s afterwards. And then people got kind of migrated over to just having PPP as their default base.

The news server ran some type of Windows OS before that, but they actually got their news feed via satellite, because they had probably 512k of bandwidth to start and they couldn’t consume the whole news feed, so they had a service that was satellite download based, where they could keep that off to primary connection. It was just a /24 network to start: 199.3.14.0/24. They had a Cisco 2500 XL gateway with a fractional T1 line, turned it into a full T1. And eventually, when they got bought they got a second T1, but they had no way to balance their outs, so they set the default gateway outbound on the T1, so it was just using 10% outbound connection and all of the stuff would come in on the other line. So it was kind of a crude way to load balancing; it actually probably caused more problems than it was worth with asymmetric stuff.

Eventually they got away from the POTS stuff and they had some SMSNmax boxes doing the dial-up stuff. And it was crazy because when I was a kid this stuff seemed really complicated and glorious, and by the time I was around 21 I could have probably rebuilt it out of spare parts in my basement.