New version releases are a common thing in the ransomware underground. The prolific Locky strain is no exception. Less than a month since the previous iteration called Lukitus surfaced, the architects of this massive campaign have come up with an update. The brand new edition appends the .ykcol extension to ransomed data, hence its catalogued denomination. This post provides a comprehensive report on this one.

What is the Ykcol ransomware?

Although security analysts and infected users refer to this Locky variant as Ykcol, that’s somewhat of a misnomer. To eliminate ambiguity, it’s worth stating from the get-go that the contagion is still Locky, except it has acquired a couple of new features. First off, the main distinguishing hallmark sign is the new .ykcol extension being suffixed to every encrypted file. Secondly, the ransom notes are now named ykcol.htm and ykcol.bmp. And thirdly, its distribution process via malspam has come to revolve around booby-trapped emails with the subject “Status of invoice”. Of course it makes sense predicting that more spam waves are imminent, so other themes are very likely to appear soon as well. 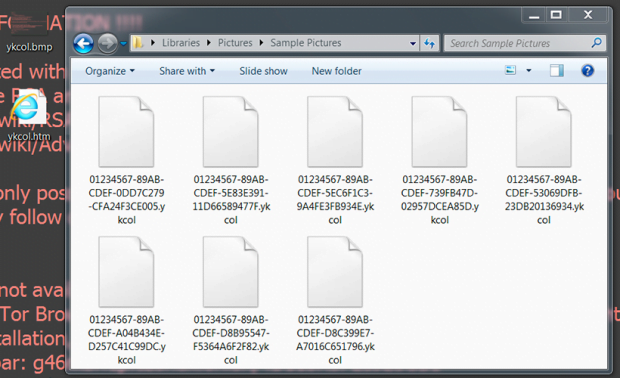 The malicious email attachment is a 7z archive. The extracted random-named VBS entity is the one to blame for deploying the contamination routine proper. Once loaded, this file covertly downloads Ykcol ransomware onto the computer. From that moment on, things get entirely out of hand. The blackmail Trojan fires up a scan for valuable data. It peeks inside all non-system paths on hard drive volumes, as well as removable drives and network shares. When a matching file is found along the way, it gets cryptographically skewed through the use of asymmetric RSA-2048 and symmetric AES-128 ciphers. This activity results in blocking access to targeted files, meaning that the victim will no longer be able to open or edit them. 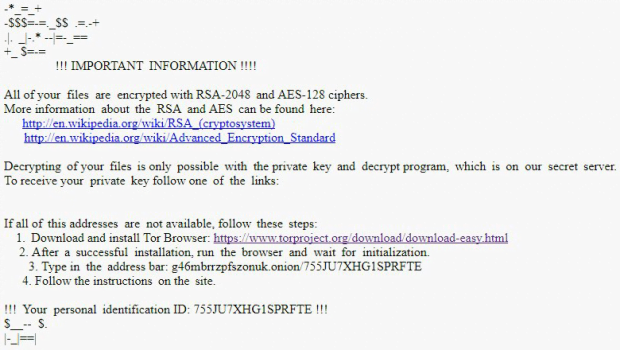 Like it has been mentioned, there is a byproduct of this unauthorized data processing – the hostage entries get the .ykcol string added at the end. There is actually more tweaking, though. The extension is prepended with 36 hexadecimal characters to make it impossible to work out what file it is. Here’s an example: a spreadsheet named, say, Schedule.xls will turn into something like 644JU6XH-G0SPRFTE-0A5B2D4A-0A78AF2AB2FE.ykcol. The ransomware also leaves how-to’s regarding the decryption options the user has. These are files named ykcol.htm and ykcol.bmp, where a random 4-character line may be inserted in between the name and extension. The BMP version of the ransom notes substitutes the desktop background to put additional pressure on the victim.

According to the crooks’ recommendations, the user is supposed to download and install Tor Browser, type a specific URL in the address bar, and follow instructions on the site named Locky Decryptor Page. The recovery boils down to sending 0.25 BTC (about $1,000) to the perpetrators, after which they will purportedly provide the private decryption key along with the automatic decryptor. Well, in real world, trusting kidnappers isn’t a good call. The same applies to cyber attacks like this. Nobody can guarantee a successful outcome if you agree to the threat actors’ terms, so your data might stay corrupted regardless. It’s always a better idea to try everything else first. The steps below are a good starting point.

It’s important to know that the Ykcol/Locky virus creates copies of your files and encrypts them. In the meanwhile, the original files get deleted. There are applications out there that can restore the removed data. You can utilize tools like Data Recovery Pro for this purpose. The newest version of the ransomware under consideration tends to apply secure deletion with several overwrites, but in any case this method is worth a try.

Verify whether the Ykcol ransomware has been completely removed