Operators of the Locky ransomware fraud appear to be exercising their extortion skills in several ways. They deposit their payload onto computers through a technique similar to the one leveraged by distributors of the Dridex banking Trojan. The virus tweaks filenames along with encrypting files themselves, thus considerably aggravating the recovery routine. And of course it demands a fee to make a victim’s data accessible again.

Nothing compares to ransomware when it comes to ripping computer users off. Currently sitting at the top of the cybercrime hierarchy, these threats drag people into a quagmire with hardly any chances to get around the elaborately devised trap. The infection that transforms one’s files into unrecognizable encoded objects with .locky extension is one of the most recent breeds of this dangerous contagion. This sample stands out from the crowd because it relies on malicious macros in Microsoft Office documents to execute the bad code, as opposed to most of its counterparts that feature backstage propagation over exploit kits or self-extracting ZIP files. Also, the Locky ransomware meddles with data stored in unmapped network shares, which is a unique trait never seen before with file-encrypting viruses. 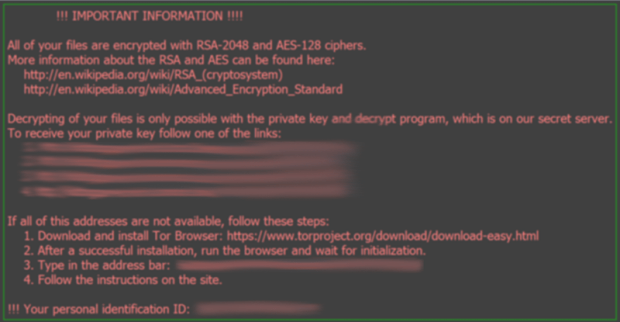 Having completed the trespass, the .locky infection looks for more than 100 file formats on the hard drive, network drives if any, and removable media. In the meanwhile, it ignores some of the system-level directories, including Windows, AppData, Program Files, and temp. Then, the items matching the hard-coded range of extensions get encrypted with AES cipher. The look of encoded files is changed drastically: the name of each one gets replaced with a lengthy array of numbers and characters, with the .locky string appending them at the end. To communicate with the victim, the ransomware substitutes the current desktop wallpaper with a BMP image, which is essentially a sequence of steps for paying the ransom of 0.5 Bitcoins. The exact same information is also available in Notepad documents titled _Locky_recover_instructions.txt embedded into every targeted folder with hijacked data. 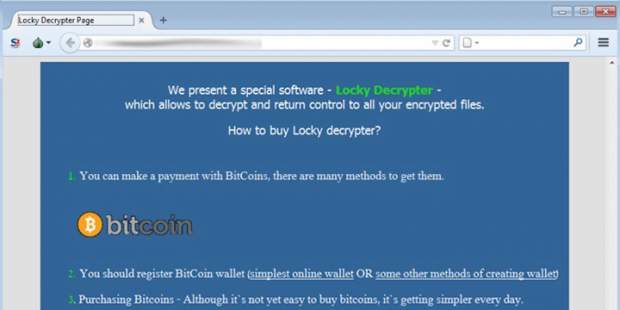 By navigating over one of The Onion Router based links provided in the ransom instructions, the victim ends up on the Locky Decrypter Page. It advises the infected person on the financial side of the imposed deal. In particular, the user is told to submit a specified BTC amount that equals around 200 USD in order to redeem the personal files. According to the details, the payment is the prerequisite of being able to download the decoder.

Locky spreads through a tricky Microsoft Word file attached to misguiding emails. These messages are masqueraded as an invoice, with the subject and document name being “ATTN: Invoice J-(8 digits)”. When the user opens it, the text looks mostly unintelligible and contains a recommendation to enable macro if the data encoding is incorrect. As soon as the person clicks the Options button next to the security warning, the macros download and execute the ransomware on the machine. Actually, there is a reason why macros are disabled by default – these components are easy to exploit for injecting malicious code. So be sure to abstain from activating them just because an email attachment asks you to.

The compromised files with .locky extensions are impossible to restore by attacking the encryption for the time being. On the other hand, it’s not recommended to pay the ransom either. The steps below present the happy medium in treating this ransomware.

2. The scan will come up with a list of detected items. Click Fix Threats to get the file and related infections removed from your system. Completing this phase of the cleanup process is most likely to lead to complete eradication of the plague proper. Now you are facing a bigger challenge – try and get your data back.

It’s important to know that the Locky file creates copies of your files and encrypts them. In the meanwhile, the original files get deleted. There are applications out there that can restore the removed data. You can utilize tools like Stellar Data Recovery for this purpose. The newest version of the file under consideration tends to apply secure deletion with several overwrites, but in any case this method is worth a try.

Verify whether Locky file has been completely removed

Again, ransomware removal alone does not lead to the decryption of your personal files. The data restore methods highlighted above may or may not do the trick, but the file itself does not belong inside your computer. Incidentally, it often comes with other file, which is why it definitely makes sense to repeatedly scan the system with automatic security software in order to make sure no harmful remnants of this file and associated threats are left inside Windows Registry and other locations.