SVG stands for “Scalable Vector Graphics”, which is a fairly popular XML-based image format that allows for extensive animation effects. One of the main pros of .svg extension files for graphics designers is that these objects can be handled via commonplace text editors, just like XML text files. The virtues being obvious, cybercriminals have come up with a way to exploit these images for ransomware distribution.

Numerous users have been reporting a Facebook spam campaign where a suspicious photo in SVG format is received over the built-in instant messenger out of the blue. The filename tends to follow a pattern like this: Photo_[random_digits].svg. The likelihood of a recipient downloading this image is fairly high, because it comes from one of the person’s actual Facebook contacts. The explanation of this trick has to do with the fact that a friend got hit by the same infection, which now attempts to hand over the malicious code to as many people as possible. According to analysts’ verdicts, the contagion propagating this way is Nemucod, an infamous malware downloader. The danger is therefore twofold. First off, the malady gains access to a targeted user’s social networking account. Secondly, it tries to install a nasty ransomware called Locky that scours the PC for personal files and encrypts them. 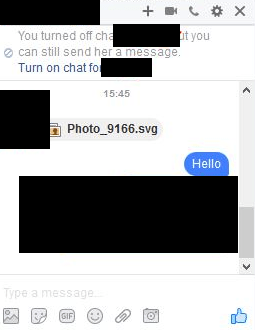 Here’s what the attack chain looks like. When a user clicks to download the booby-trapped photo, they unknowingly trigger offending JavaScript code that’s covertly built into the file’s XML content. This event ends up opening a Chrome window and redirects the victim to a website that bears a strong resemblance to YouTube but is actually a bogus page. The site looks like it hosts some video, but a popup alert will state that the content won’t play unless the user adds a Chrome extension called “One” or “Ubo”. This pseudo add-on is misleadingly described as a codec extension to watch the above-mentioned video. 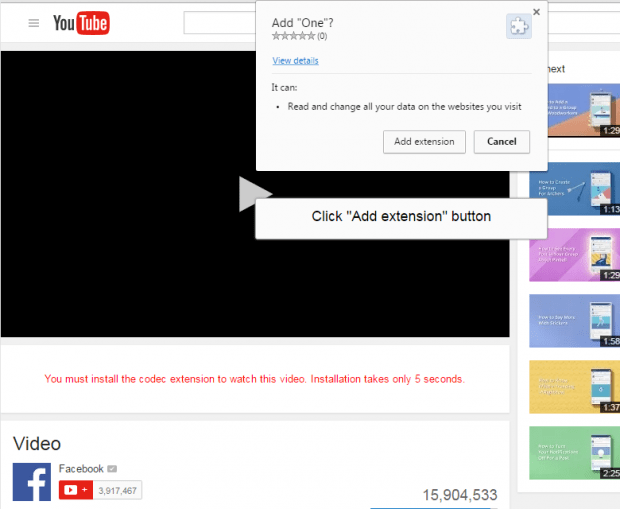 Interestingly enough, the popup says that the extension can “read and change all your data on the websites you visit,” which is true. Nonetheless, some people do install this bad item and thus expose their machines to a severe breach. Once the rogue browser helper object obtains these privileges, it accesses the victim’s Facebook account and starts sending the contagious .svg file to all contacts in a stealthy fashion. This is a crafty, self-contained loop that amplifies the attack surface without direct involvement of the threat actors.

The notoriety of Nemucod revolves around its ability to install other malware behind the scenes. Unfortunately, that’s exactly what happens here. The malicious kit downloads and executes the Locky ransomware on the infected system. The latest version of this ransom Trojan will encode the user’s important files using AES and RSA ciphers, scramble filenames beyond recognition, append the .aesir extension to all of these entries, and extort 0.5 Bitcoin for decryption. All in all, the Facebook spam campaign involving SVG files poses one of the most intricate methods to disseminate crypto ransomware. An additional issue is that the Nemucod infection will be active in the background, and who knows what other payloads it may drag into the PC and execute further on.

It’s important to know that the Locky ransomware creates copies of your files and encrypts them. In the meanwhile, the original files get deleted. There are applications out there that can restore the removed data. You can utilize tools like Data Recovery Pro for this purpose. The newest version of the ransomware under consideration tends to apply secure deletion with several overwrites, but in any case this method is worth a try.

Verify whether the .SVG file virus has been completely removed