What can possibly be a more harmful computer threat than file-encrypting ransomware? The only infection that beats this malware category in terms of the damage is the perpetrating code that affects Master Boot Record of a targeted machine. HDDCryptor, aka Mamba ransomware, completely denies access to a compromised operating system, encodes important files and instructs victims to reach the adversary at cryptom27@yandex.com.

What is the cryptom27@yandex.com ransomware?

As opposed to the overwhelming majority of ransomware strains at large, the one in question renders plagued computers inoperable. That is, not only does it scramble files stored in popular data formats, but it also rewrites a workstation’s MBR (Master Boot Record). A number of samples with similar functionality have popped up during this year, including Petya and Satana bootkit, but the first specimens of the cryptom27@yandex.com ransomware had surfaced earlier, so it’s sort of a pioneer in utilizing such complex PC locking mechanisms. The ransom warning displayed on the boot screen of a contaminated computer says,

Each one of the previous versions of HDDCryptor featured a different wording and used a different email address to reach the threat actors. Obviously, the ransomware is evolving. 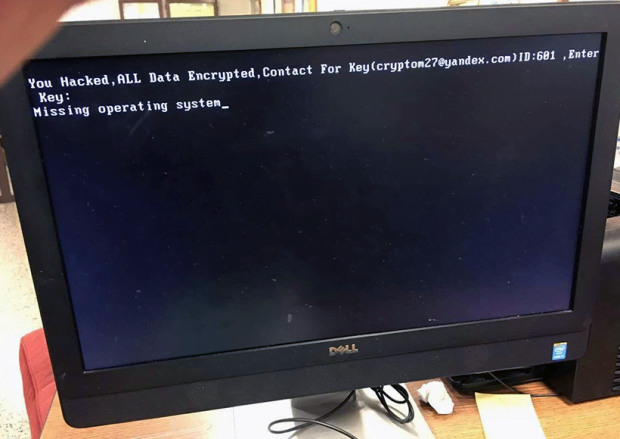 A particularly scary phrase on the lock screen is “Missing operating system”. This isn’t quite true. In fact, the infection emulates this effect by overwriting boot sectors so that a malware-stricken machine is forced to perceive this as the absence of the OS as such. The damage is reversible, though, but it’s a matter of submitting the requested amount of cryptocurrency to the crooks, who claim to provide the decryption key in return. The ransom is 0.5 BTC on average for every affected machine. The problem is, this ransomware mainly targets enterprise networks, so the amount may reach tens or even hundreds of Bitcoins for complete recovery.

The cryptom27@yandex.com virus ends up on computers as a result of drive-by downloads from malicious or hacked websites. In some cases, it has infiltrated systems over spam, where a booby-trapped attachment triggers the infection chain when opened by an unsuspecting recipient. This ransomware has extensive proliferation capabilities, so it propagates to other computers on a corporate network within minutes. Once deployed on all workstations, it drops and executes offending processes called dccon.exe and mount.exe. The former scrambles data residing on the hard disk, and the latter encrypts files on mapped network shares. The cryptographic algorithm used for this routine is RSA-2048, which is asymmetric hence extremely strong. Then, the virus overwrites all Master Boot Records for HDD partitions with a custom boot loader and forces the computer to restart.

The victims are, apparently, forced to shoot an email to cryptom27@yandex.com from a healthy PC for recovery instructions. The criminals will respond with the Bitcoin wallet address and the amount of digital cash to send for decryption.

The following news demonstrates how viable the extortion model behind HDDCryptor is: the threat actors were able to compromise thousands of computers on the San Francisco Municipal Transit Agency’s network on November 25, 2016. This attack has caused a temporary collapse of the computerized faring service, also hitting Muni’s email and SQL database servers, payroll system and other critical digital infrastructure components. The hackers demand 100 Bitcoin, or about $73,000, for unlocking the hostage machines.

Unfortunately, it’s impossible to get around the blocking by HDDCryptor, or Mamba ransomware, at this point. If a victim somehow manages to boot into Windows, though, it may be feasible to decrypt individual files using the methods below.

It’s important to know that the cryptom27@yandex.com virus creates copies of your files and encrypts them. In the meanwhile, the original files get deleted. There are applications out there that can restore the removed data. You can utilize tools like Data Recovery Pro for this purpose. The newest version of the ransomware under consideration tends to apply secure deletion with several overwrites, but in any case this method is worth a try.

Verify whether Cryptom27@yandex.com ransomware has been completely removed