Once you install all security software, the next thing to do is to install all software updates. The point is that in many cases malware and viruses exploit weaknesses they find in software installed on your computer. Manufacturers of software often come up with fixes for those weaknesses. If you install those, viruses just will not be able to use them. It might be still on your computer, but no longer has a hole to exploit. For all intents and purposes, such virus is just dead. 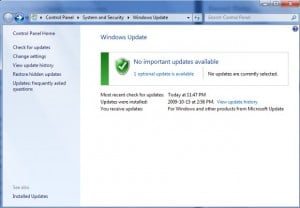 The first thing you need to do is install all Microsoft updates: Windows updates, Office updates. You need to run your computer all the way up to where the current updates are, and that may take quite a while. If you download all those updates, it may take 4 to 6 hours depending on what stage your computer is. Basically you need to install all the service packs, all that stuff.

The first thing to do is to update all Windows software: operating system, Office etc. There are viruses that really exploit things in Office, but people often do not think of updating these.

Another thing to do is to update Adobe software. I am not a big fan for Mac software, do not like the pretension of the Mac world, but one thing I would say for Steve Jobs is he was correct in hating Adobe with passion: Adobe Flash, Adobe Reader have major holes. Basically, you may have a very secure system, but this secure system could be hacked through outdated Flash and outdated Adobe Reader. That is true, Steve Jobs or not Steve Jobs, but he was right in that Adobe Flash was insecure in a lot of ways.

I like Flash, I like Reader, but that is insecure, true. One of the things to do is you need to update Adobe software on your computer otherwise this could be the way the viruses can exploit your system.

The next thing to do is to install latest versions of Java. I saw it a lot a few years ago. Well, Java is one of those things that people need once and never use again. A few years ago there was a case where a lot of people installed Java in 2003 and never needed that again. As virus got into those computers, since Java was there, but never updated, the virus managed to exploit all the vulnerabilities in Java and caused a lot of problems. Basically, all you would need to do is to install new version of Java, and that would not be able to run on your computer.

So, with Java, Adobe, as well as QuickBooks, iTunes, any software your client is going to be using and that you have updates for, you are going to update. Again, if you cannot update these, it is better to uninstall such software. So, update or uninstall. If you have iTunes, update it to the latest version. Update QuickBooks to the latest version, definitely update Java, definitely Adobe Reader, definitely do it with Flash. Also, do all Microsoft updates.

There are many viruses and malware exploiting old weaknesses in software. You will be surprised how effective it is to simply update your computer. Many times all you need to do is simply update your PC. Again, even if viruses are there, the holes they are going to exploit no longer exist, so they do not really matter.

Updating is huge thing. Again, put the computer on automatic updates so that computer updates continuously go in the future.

As you have updated your computer: OS, Office, QuickBooks, Adobe, Java, iTunes etc., now you are going to run antivirus/antimalware scans on the computer. You can run scans simultaneously: you can run full scan with Microsoft Security Essentials, and at the same time you can run full scan with Spybot Search & Destroy. This can take a significant time, so you can do this side-by-side, together. You will have an option of full scan and quick scan. Please do full scan.

One of the pieces of such software that is known to be really very effective is something called ComboFix. It is a free piece of software. You can download it and it will try to combat viruses, as well as fix problems the viruses and malware create on your computer. In many cases viruses and malware do such tricks as disabling Task Manager, hiding Control Panel, disabling or hiding different icons, things you need to be able to use on your PC. So, ComboFix will try to bring all those things back. Basically, if Task Manager is out, ComboFix will be able to bring back Task Manager, etc.

Another piece of software to try if things go wrong so far is Malwarebytes. It has a free trial version that you can use. Again, this is another very effective piece of software. You can install and run it on the computer to see if it cleans viruses which are still there. If that does not work – go to Google, frankly, and see what you can do to try to fix your computer. Again, as explained before, if you are disappointed, if you have gone through all these steps and your computer still does not work well, the normal suggestion that you just go away from that and reload your computer. If you try to remove the virus, it can be a real pain in the butt.

If at that stage the virus is not gone, you need to google and do a whole bunch of research to figure out what to do next. Like I have said, you may try different scanners. If your Task Manager is grayed out or Control Panel does not exist, the cause is in Registry settings. You need to google that and then you will be able to find the Registry key you need to change, which is responsible for settings that make Control Panel disappear and Task Manager gray out, etc. (this assumes you still can get to the Registry, for some viruses are really evil [and block it]). So, at this point, if viruses are still there, just google, do some research, there are no set ways to get rid of viruses at this point.

So, once you have done all updates and everything, you are going to run the scans. If your antivirus software does not work, antimalware does not work, try something called ComboFix, Malwarebytes. Basically, just try to google for the solution.

As stated before, in many cases it does not make sense to try to clean an infected PC, but if you have to, for whatever reason, say, it is a server and you do not have software anymore, then at this point you just need to start googling to figure it out.