Locky ransomware devs appear to have been really busy rolling out updates to their nefarious extortion product lately. Less than a month after the emergence of the previous “Odin” variant, a brand-new iteration has been discovered that appends the .shit extension to one’s crippled files. Other than the somewhat different filename skewing effect, this version of Locky also exhibits a number of distribution-related enhancements.
Update: One day after the .shit version was released, a new edition – .thor file – took the wheel of the Locky campaign.

What is the .shit file virus?

The Locky crypto virus has been in the wild for almost a year now and hasn’t suffered a slightest decline in its rotation pace over this period of time. On the contrary, it stays one of the prevalent and most dangerous ransomware samples at this point. Moreover, despite considerable intellectual efforts on researchers’ end, this strain is still not decryptable. That being said, the frequency of new Locky edition releases has increased, which aggravates the detection and decryption tasks further. The previous variant dubbed Odin didn’t even last for a month. The most recent tweak has brought about a few major changes. First off, the infection has started to concatenate the .shit extension to all files that got encrypted in the course of the compromise. Secondly, the operators of this campaign chose to modify the format of the malicious loader. 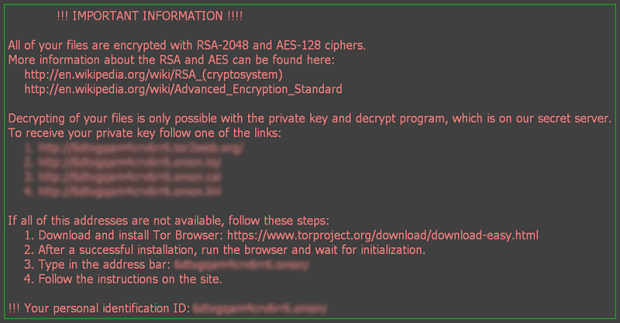 The way Locky is currently propagating is still via spam backed by the powerful botnet dubbed Necurs. The format of the attached rogue file, however, has been altered to .hta. It denotes an HTML application that triggers offending processes in the background as soon as an unsuspecting user opens it. These deceptive emails may contain the following subjects: “Receipt” or “Complaint letter”. The attachment is most likely a ZIP archive that extracts to a file named Receipt [random digits].hta, Complaint letter [random digits].hta, or Saved letter [random].hta. The use of this new format of the loader is presumably aimed at evading AV detection and streamlining the attack workflow.

Once the ransomware executable is dropped onto a targeted system and starts running, it triggers a scan for data. When performing this scan, the .shit version of Locky looks for widespread types of files on the hard drive, removable drives if any are connected to the computer, and network shares. Then, it uses a combination of RSA-2048 and AES-128 cryptographic algorithms to encrypt all the entries identified as personal ones during the above-mentioned scan. The infection moves on by replacing the desktop wallpaper with a warning picture of its own. It also adds ransom notes called “_HOWDO_text” to the desktop and sprinkles them across encrypted directories. These manuals as well as the new desktop background instruct the victim to visit the Locky Decryptor page and use information on it to submit about 0.5 Bitcoin for the automatic decrypt solution.

An interesting property of the .shit extension variant of Locky is that it can encrypt data in offline mode. This means that it needn’t query an external Command and Control server for crypto keys, so it’s now an autonomous threat. Furthermore, it doesn’t raise any red flags as far as one’s Firewall protection goes, which provides the attackers with an extra layer of obfuscation. Whereas decrypting .shit files without paying for the private RSA key is barely possible, the infected users should consider leveraging a smart forensic methodology to restore the most important data.

Update: One day after the .shit version was released, a new edition called the Thor ransomware took the wheel of the Locky campaign.

It’s important to know that the Locky virus creates copies of your files and encrypts them. In the meanwhile, the original files get deleted. There are applications out there that can restore the removed data. You can utilize tools like Data Recovery Pro for this purpose. The newest version of the ransomware under consideration tends to apply secure deletion with several overwrites, but in any case this method is worth a try.

Verify whether Locky ransomware has been completely removed