How to remove WannaCry ransomware and decrypt .WNCRY files

A ransomware strain called WannaCry is hitting the headlines of the world’s leading security resources. Such a close attention is for a reason. This infection has attacked a nuWNCRY file ransomware removermber of large companies in Europe over the past few days, and it keeps making the rounds in a steady fashion. The ransom Trojan encrypts its targets’ proprietary data records and blemishes them with the .WNCRY file extension.

What is the WannaCry ransomware?

The .WNCRY file virus, which also manifests itself as Wana Decrypt0r 2.0, represents a relatively new lineage of crypto threats. On the outside, it looks similar to its precursor called WCRY, or Wanna Decryptor 1.0. It took the architects of this campaign a little more than a month to release an updated version of their plague. The latest variant proved to be much more complex and robust in terms of the propagation, encryption mechanism and extortion techniques. The rapidity of its circulation is unprecedented – it reportedly contaminated a whopping 57,000 computers over the course of only several hours on May 12, 2017. This prevalence is explained by the fact that the cybercriminals are using NSA exploits dumped by hackers earlier this month. This way, the felons are able to access workstations remotely via RDP and run the ransomware without having to social engineer the victims. 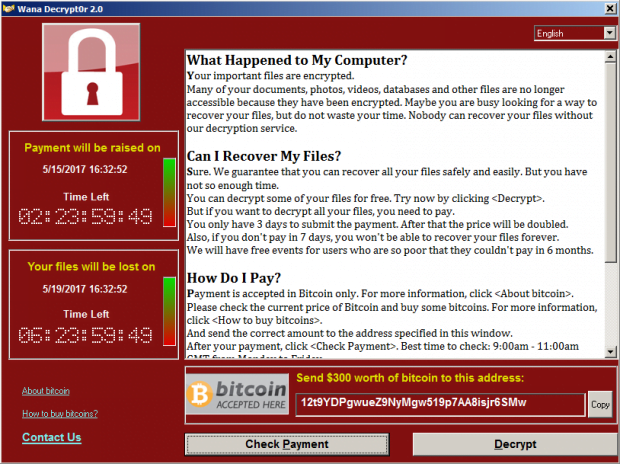 Identifying this strain is fairly prosaic. Having completed the contamination chain, it configures the target system to display a new desktop background with a warning message on it. Furthermore, a screen titled Wana Decrypt0r 2.0 pops up, providing details of what happened and displaying the amount of time during which the ransom must be submitted. The information in this window also includes the size of the ransom, which is the Bitcoin equivalent of $300, as well as the Bitcoin address to send the digital cash. Another conspicuous hallmark of the assault is a new file extension added to encrypted data. The list of possible extensions at this point includes .WNCRY, .WCRY, .WNRY, and .WNCRYPT. The first one, .WNCRY, is most frequently encountered during this particular ransomware wave. The original filenames are not changed, so victims are confronted with the following transformation of a sample file: Chart.xlsx – Chart.xlsx.WNCRY.

The WannaCry ransomware also leaves a plaintext ransom note to make sure the victim won’t fail to find the decryption walkthrough imposed by the attackers. It’s named @Please_Read_Me@.txt. The wording in it is slightly different than on the above-mentioned warning window. It says, “What’s wrong with my files? Oooops, your important files are encrypted. It means you will not be able to access them anymore until they are decrypted. If you follow our instructions, we guarantee that you can decrypt all your files quickly and safely.” Long story short, the recovery method suggested by the crooks presupposes that the user must pay $300 worth of Bitcoin and then run an application called @wanadecryptor@.exe, which is dropped onto the computer as part of the attack. 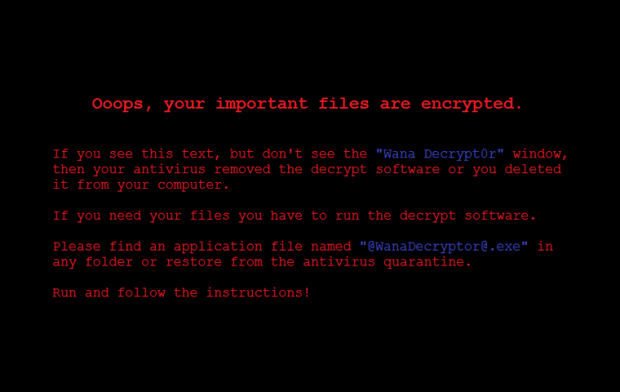 To protect itself from being terminated, the WannaCry virus displays a few tips on the new desktop wallpaper. It provides steps applicable if the victim’s antimalware suite had removed the Wana Decrypt0r tool. The desktop message specifies instructions to re-launch the malicious executable in order to be able to proceed with decryption through payment. All in all, the attack looks well-thought-out no matter how you slice it, which suggests that the campaign is being operated by threat actors with significant extortion background. The technically complex distribution via RDP poses another evidence that the crooks aren’t rookies in what they are doing. So the security industry is facing another skilled adversary, and hopefully the white hats will contrive a countervailing methodology sometime soon.

Meanwhile, WannaCry keeps infecting organizations and end users on a large scale. Some of the reported victims include a Spanish telco provider and a number of UK healthcare institutions. Of course, the best defense is not to get infected in the first place. If the compromise has occurred, the instructions below are the starting point for troubleshooting.

It’s important to know that the WNCRY ransomware virus creates copies of your files and encrypts them. In the meanwhile, the original files get deleted. There are applications out there that can restore the removed data. You can utilize tools like Data Recovery Pro for this purpose. The newest version of the ransomware under consideration tends to apply secure deletion with several overwrites, but in any case this method is worth a try.

Verify whether Wana Decrypt0r 2.0 ransomware has been completely removed