How to uninstall Strongvault Online Backup program from Windows PC

Whoever might question the reliability and safety of the Strongvault application has got grounds for incredulity. The tool does actually feature online backup of its clients’ data without charging any fees, but a lot of users have been reporting serious system issues and difficulties getting rid of it. Internet activity tracking and ads serving are a couple of additional downsides accompanying this controversial product’s operation inside a computer.

Strongvault Online Backup isn’t a piece of software that people find and install as they seek remote file storage services. Instead, the application gets strong distribution assistance from other utilities, most of which are absolutely unrelated to the backup realm. This abnormal characteristic is among the several indisputable indications of maliciousness attributed to the applet under scrutiny. It’s flagged as potentially unwanted because users take no informed action prior to this installation. What they do is authorize an arbitrary accomplice, such as a free media player or movie downloader, to enter the machine. The checkmark during such setup – about allowing Strongvault to also infiltrate the system – is usually hardly noticeable or not displayed at all. The respective unexpected Desktop and Start menu icons, as well as a new process named SMessenger.exe, therefore take the user by surprise. 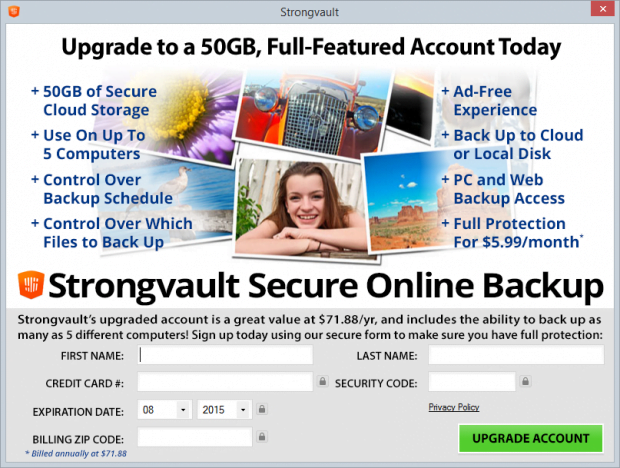 When auto-started, Strongvault suggests you go through a quick registration routine to create a free account. It also recommends running a scan that purportedly spots potentially important files on the hard drive and then offers the promised backup on its server. This isn’t a bad approach at all – in fact, that’s how the average data backup solution works. However, throughout this whole process Strongvault users face a number of issues that require urgent troubleshooting. This tool renders the computer unstable. Multiple error messages, BSOD encounters and software crashes reportedly occur along the way. Furthermore, the program can affect web browsers in several ways. It injects advertisements in web pages and might modify custom Internet settings such as the start page or default search. Suddenly getting an acting-up PC because of one app is too big a price to pay for free backup, no wonder users promptly find themselves in desperate need for removing the troublemaker.

Additional problems typically surface at this point. Even through Strongvault is listed among installed programs and it doesn’t prevent the uninstalling from Control Panel, some of its components seem to be left behind afterwards. This causes more error popups and further instability of the workstation. The simple steps below are at your disposal to thoroughly eradicate this dubious software.

The extermination of Strongvault Online Backup infection can be efficiently accomplished with reliable security software. Sticking to the automatic cleanup technique ensures that all components of the infection get thoroughly wiped out from your system.

2. The scan will come up with a list of detected items. Click Fix Threats to get the infection removed from your system. Completing this phase of the cleanup process is most likely to lead to complete eradication of the infection. However, it might be a good idea to consider ascertaining the infection is gone for good.

Verify whether Strongvault Online Backup infection has been completely removed

For certainty’s sake, it’s advised to repeatedly run a scan with the automatic security software in order to make sure no harmful remnants of this infection are left inside Windows Registry and other operating system locations.