Promorad2 (promok) is a hallmark noted by the users who have their computer data scrambled. The encryption is to be blamed on the ransomware. According to the classification attempts available from the websites reviewing ransomware on a regular basis, this is a version of STOP ransom trojan.

Nearly any encryption-for-ransom includes a growing set of extensions. The extensions released first typically become family names. That is, Promorad2 represents the family of ransomware which was adding .STOP and .DJVU extensions in its initial releases, hence .STOP is the family name. The follow-up includes a number of other extensions and minor modifications in the body of the virus. 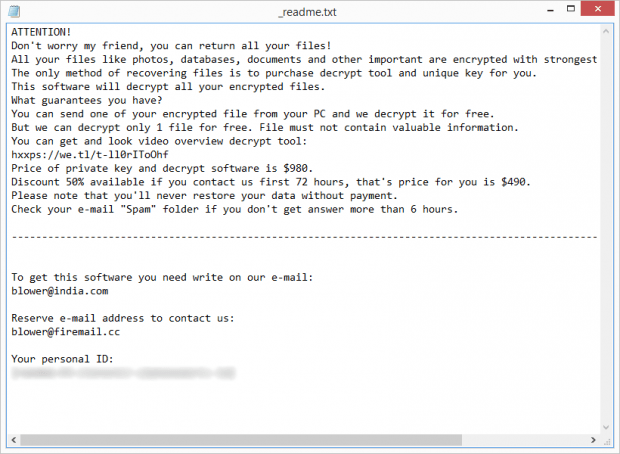 To that end, .STOP/.DJVU splits into two groups, exactly into .STOP and .DJVU. The .DJVU includes three sub-groups, one of which is .promorad2. This subgroup includes the .promok and .promorad ransom Trojans. Promorad2, just like any other virus of its family, applies AES cypher to encrypt data. AES stands for Advanced Encryption Standard, a symmetric encryption algorithm. That implies the same key to be used for both decryption and encryption. Obviously enough, the key has already processed the data to have it encrypted. That is, the ransomware introduced it into the memory of the devices it hacked. It goes without saying that such an introduction provides adequate measures to keep the key secret. It is meant to be sold to the legitimate holders of the data by the criminals deploying the attack. However, the attack needs to have the key integrated into the system to be compromised. This is a chance for IT security to interfere intercepting the key.

Removal of STOP/DJVU encryption is available for some of its versions with the private key intercepted as outlined above. This chiefly applies to the offline key used by malicious encryptor. Online key exposure to the process is insufficient to successfully derive it for decryption purposes. Promorad2 ransomware decryption is not available with such interception-based decryption, at least as of now. The crooks behind the attack demand payment for the private key. It is payable in bitcoins. The price is up to USD 600.

Promorad2 is a threat to any operating system. Latest reports on its invasion originate from Mac users though. The victims also report the infection affects all the files around. USB and network memory are under attack.

Apart from decrypting your data, it is essential to get rid of Promorad2 (Promok) ransomware. This comprehensive approach underpins the removal guide as available below.

It’s important to know that the Promrad2 ransomware creates copies of your files and encrypts them. In the meanwhile, the original files get deleted. There are applications out there that can restore the removed data. You can utilize tools like Data Recovery Pro for this purpose. The newest version of the ransomware under consideration tends to apply secure deletion with several overwrites, but in any case this method is worth a try.