The ins and outs of the Philadelphia ransomware reflect the heterogeneity of the extortion-centered cybercrime underground. This sample is backed by a Ransomware-as-a-Service platform advertised on darknet sites and forums as an extensively flexible service to get the bang for one’s buck. Everyone interested can purchase a copy of the perpetrating program for $400 and cook up a money-harvesting campaign of their own.

What is the Philadelphia ransomware?

This strain is affiliated with the notorious Stampado family, so it’s got an eventful background as well as its architects’ tried-and-tested tech skills behind it. The Philadelphia ransomware never stayed on the sidelines of e-extortion trends since it emerged. It is part of a well-orchestrated RaaS network boasting high customizability and advanced statistics tracking. Furthermore, here are some bare facts on this one: the code proper is written in AutoIT scripting language; the virus employs AES-256 cryptosystem to cripple victims’ files; it scrambles original filenames with RC4 stream cipher and appends the .locked extension to the mutilated strings. The crooks who buy a build of Philadelphia infection can define paths on plagued computers to scan for files, edit text on the program’s interfaces, add languages and do some further tweaking. 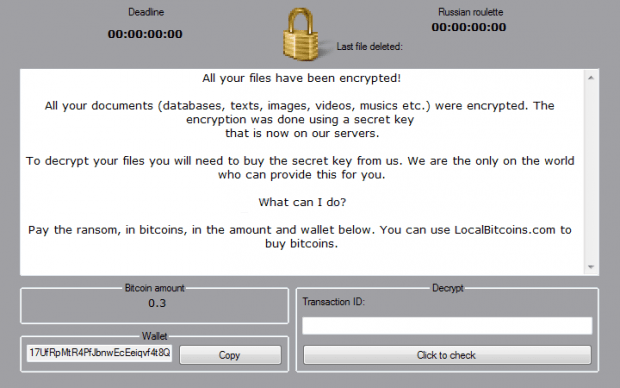 In terms of the propagation, the ransom trojan in question is email-borne. It contaminates Windows workstations via misleading debt notices attached to phishing emails. When opened, these files lead to an obfuscated JS artifact that stealthily downloads and runs the crapware on the computer. As soon as this happens, the Philadelphia ransomware starts cross-checking the victim’s files against a hard-coded list of targeted formats. It looks inside local drives, network directories, USB memory sticks and other types of removable drives. About 30 popular types of data are at risk, including Microsoft Office documents, various graphics formats, archives, audio and video files. While applying the above-mentioned Advanced Encryption Standard with 256-bit keys, the pest also replaces filenames with long lines of hexadecimal characters. Not only do these items become inaccessible, but it’s also impossible to work out what exactly has been encrypted. As the final stroke of the crooks’ brush to the nefarious masterpiece, the .locked extension gets concatenated to every entry. 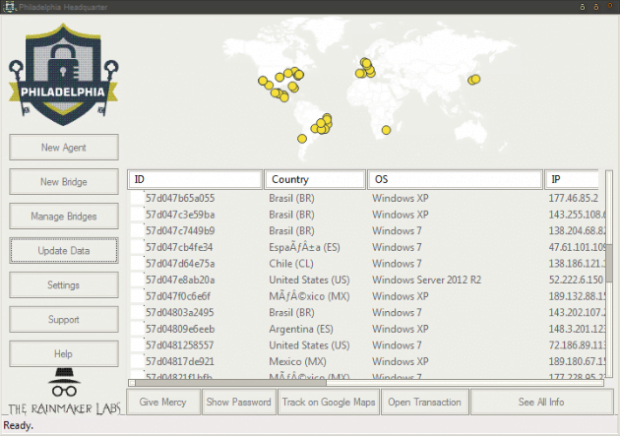 After the encryption and name skewing part of the compromise has been completed, the Philadelphia trojan displays a warning screen that also performs the function of a ransom note. Its default edition says, “All your documents (databases, texts, images, videos, musics, etc.) were encrypted. The encryption was done using a secret key that is now on our servers. To decrypt your files you will need to buy the secret key from us. We are the only on the world who can provide this for you.” In other words, the online predators want the victim to submit a ransom of 0.3 BTC to a Bitcoin wallet specified in the message. Otherwise, the so-called “Russian roulette” feature steps in. Its essence consists in the irreversible obliteration of a certain number of files after a specific amount of time expires. In addition to that, the ransomware provides a general deadline for coughing up the cryptocurrency. Note that the size of the ransom and all deadlines are set by every distributor individually via their personal Philadelphia Headquarter pane, so these values may vary.

Fortunately, there may be imperfections in the way the Philadelphia ransomware distributors configure and deploy their campaign. This may provide a loophole for successful data recovery through forensic and other methods described below. Meanwhile, users should bear in mind that prevention is the best cure. A bit of extra caution when handling spam emails can thwart the overwhelming majority of ransomware attacks.

It’s important to know that the Philadelphia virus creates copies of your files and encrypts them. In the meanwhile, the original files get deleted. There are applications out there that can restore the removed data. You can utilize tools like Data Recovery Pro for this purpose. The newest version of the ransomware under consideration tends to apply secure deletion with several overwrites, but in any case this method is worth a try.

Verify whether Philadelphia ransomware has been completely removed