As weak as it is, the ransomware economy appears to be slowly regaining momentum. At least, that’s how things look on the arena of targeted attacks, where the preys are either specific organizations or countries. The Nozelesn ransomware campaign, which broke out recently, exemplifies this tendency as it mainly focuses on infecting users in Poland.

What is the Nozelesn ransomware?

Whatever the name could mean, Nozelesn is a competently coded sample of blackmail malware used primarily in targeted attacks. It was first reported in early July 2018 and has since infected numerous home users and organizations in Poland, demonstrating its targeted essence. For the record, though, some users have been hit outside the country, which is a predictable collateral damage in these waves. Perhaps the accidental victims share some files with the intended ones in the cloud. Anyway, the original run of the attacks was mostly deployed using spam. The crooks sent out a bevy of spoof emails camouflaged as DHL invoices, where the attached file triggered the infestation chain on recipients’ machines.

In case this social engineering trick works out and the user gullibly opens the embedded fake invoice, the Nozelesn ransomware payload will be executed in a surreptitious way, with hardly any chance of detection. Then, the offending code will initiate a major scan for data on the host as well as external drives and network shares, both mapped and unmapped. Every object found during this scan will become encrypted. There are scarce details at this point about the exact encryption algorithm being applied, but it’s most likely a fusion of symmetric AES (Advanced Encryption Standard) and asymmetric RSA cipher. The crypto implementation appears to be done right, so there is currently no free fix for this predicament. 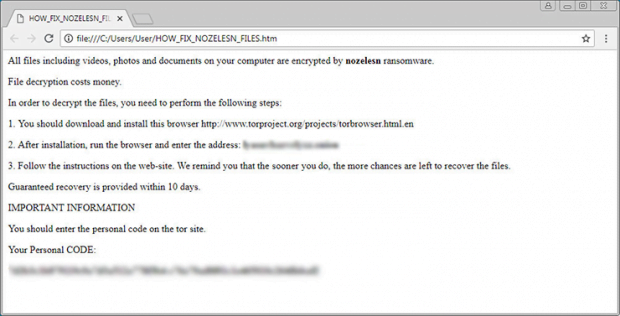 Not only do the encrypted files change on the inside, but their external manifestation undergoes a modification, too. The filenames get the .nozelesn string concatenated to them, so a sample one named Report.pdf will morph into Report.pdf.nozelesn. In order to give the victim some clues on what to do with the numerous weird objects that suddenly replaced their personal files, the virus adds a ransom note named HOW_FIX_NOZELESN_FILES.htm to the desktop. Just like the average how-to in crypto extortion scenarios, this one starts with a warning phrase, namely, “All files including videos, photos and documents on your computer are encrypted by nozelesn ransomware.” It also provides three steps to decrypt files, emphasizing that it will cost money.

Ultimately, the victim is forwarded to a Tor page called “Nozelesn decryption cabinet”. It demands 0.1 BTC, worth about 650 USD, for the secret key that will supposedly help decrypt files. Moving on with the payment is a terribly cold comfort, though, even if the criminals’ decryption routine works. The most important thing recommended in the Nozelesn ransomware raid scenario is to first try all the options that don’t involve interacting with the attackers. The part below will shed light on those methods.

It’s important to know that the Nozelesn extension creates copies of your files and encrypts them. In the meanwhile, the original files get deleted. There are applications out there that can restore the removed data. You can utilize tools like Stellar Data Recovery for this purpose. The newest version of the extension under consideration tends to apply secure deletion with several overwrites, but in any case this method is worth a try.

Verify whether Nozelesn extension has been completely removed