Ransomware campaigns are gradually mutating towards a targeted approach and a larger attack surface. Few present-day lineages are going after individual users – instead, the focus is on big enterprises that can afford to pay fortunes just to get their proprietary data back. The new sample called MegaCortex fits the mold of such a novel modus operandi.

What is the MegaCortex ransomware?

Which way is the ransomware plague heading? This is kind of a tough question, given the numerous cyber gangs in play, plus the discrepancies between different strains of the perpetrating code. There is some common ground, though. The most conspicuous vector of the evolution comes down to targeted attacks, as is the case with a specimen called MegaCortex. Originally spotted in May 2019, this family has been plaguing business networks and its wicked operators have reportedly had some success. However, it’s not until early August that this wave grew into a real disaster. The latest variant of MegaCortex, which appends the .megac0rtx extension to hostage files, has made quite a few high-profile victims, with the lowest demanded ransoms amounting to 2 Bitcoin, or over $23,000. On top of that, the infection now leverages clever evasion and persistence techniques allowing it to do the most damage with the smallest possible chance of being stopped in its tracks once the incursion has begun. 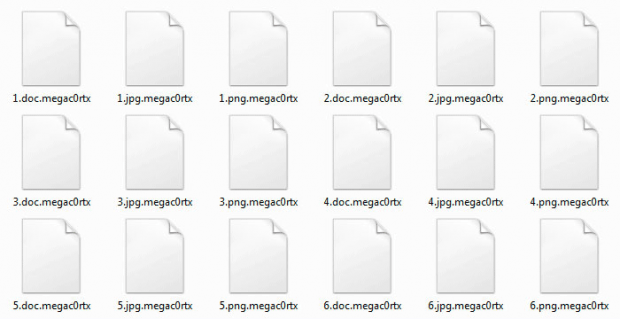 The distribution of MegaCortex ransomware is composed of a series of events. First, the crooks gain a foothold in an enterprise environment by hacking the domain controller, a server that handles user authentication within the network. There is very little known about the specific mechanisms of this exploitation at the time of writing, but the fact is that the attackers obtain sufficient privileges to run arbitrary processes remotely behind the admins’ backs. The next move engages the PsExec utility to disseminate the offending code from the enslaved domain controller to other computers on the same network. The deleterious binary used in the recent attacks is called winnit.exe. The authors of this strain were able to somehow get a valid digital certificate for their code, consequently they don’t have to obfuscate the unauthorized encryption part of the onslaught via multiple scripts that would otherwise need to be fired up in several stages. All in all, the wrongdoers get to the cryptographic phase of the breach in a very sneaky and sophisticated fashion. 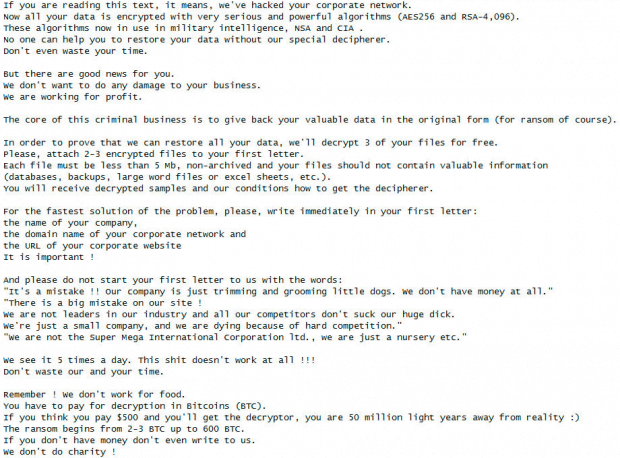 Having found the entirety of valuable files on the compromised hosts, MegaCortex applies a cipher to lock them down. As a byproduct of this workflow, it concatenates the above-mentioned .megac0rtx string to each encoded entity while leaving the original filenames intact. So, if an image Selfie.bmp undergoes the impact, then it gets renamed to Selfie.bmp.megac0rtx. The ransomware also drops a rescue note onto the desktop – this document named !!!_READ-ME_!!!.txt contains the ins and outs of the paid data recovery. In a nutshell, it uses fairly austere tone to instruct the victim to complete the buyout of the decryption solution and the relevant secret key. Again, the sum is astronomical and may be as high as hundreds of Bitcoins, with the upmost threshold of 600 BTC being mentioned in the criminals’ message. That’s millions of dollars, which could potentially be extorted from a major organization that fell victim to the electronic parasite in question.

There are several more unsettling facets of the MegaCortex blackmail virus that are worth mentioning. One of them is that the pest terminates more than a thousand Windows services and processes before getting down to the data encryption routine. The goal is to prevent security tools and backup solutions from interfering with the flow of the attack. The culprit also skips a handful of Windows directories and file types when looking for objects to be encrypted. This quirk ensures that the virus-tainted machine continues to function, except that the stored information becomes inaccessible. Yet another trait of MegaCortex is that it is likely to tailgate into business networks alongside notorious info-stealing Trojans codenamed Qakbot and Emotet.

Obviously, all the facts regarding this ransomware add up to form an ugly big picture: it is one of the nastiest in-the-wild threats of its sort. Hardening the defenses of corporate IT infrastructures is now more important than ever before, given the rapid shift in the popular cybercrime model. In case the attack has already occurred, be sure to eliminate the dangerous code and try some of the best practices of data recovery to reinstate the most valuable records.

Methods to restore .megac0rtx files encrypted by the MegaCortex ransomware

It’s important to know that the MegaCortex ransomware creates copies of your files and encrypts them. In the meanwhile, the original files get deleted. There are applications out there that can restore the removed data. You can utilize tools like Data Recovery Pro for this purpose. The newest version of the ransomware under consideration tends to apply secure deletion with several overwrites, but in any case this method is worth a try.

Verify whether MegaCortex ransomware has been completely removed