Some organizations headquartered in Latin America have recently felt the destructive impact of the new edition of the KillDisk ransomware. This strain gained notoriety for involvement in sabotage campaigns where infected companies’ proprietary data got erased without the slightest change for recovery. Learn how the latest variant of this virus acts and how to avoid it.

What is the KillDisk (troj_killdisk.iub) ransomware?

The perpetrating program codenamed KillDisk has been around for at least two years. Its early recorded activity commenced in late 2015, when a mysterious cybercriminal group dubbed Telebots used it in tandem with the BlackEnergy malware to hit Ukrainian power infrastructure. It’s back then that researchers started associating the infection with Russian state-sponsored black hats. Later on, KillDisk was leveraged in attacks fired at industrial equipment in the United States and a few more high-profile incidents. The most recent incarnation of this culprit has been targeting Latin American firms from the finance sector. This particular variant has been catalogued as troj_killdisk.iub. For the record, its SHA256 hash is 8a81a1d0fae933862b51f63064069aa5af3854763f5edc29c997964de5e284e5. 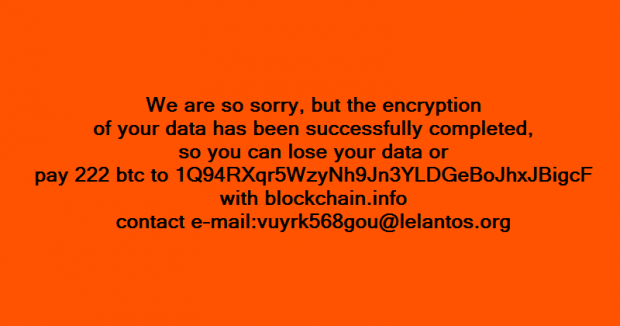 The modus operandi of this highly disruptive malware has gone through some evolution since its emergence. Whereas it originally pursued the objective of outright data wiping, it has come to imitate classic ransomware in order to add a ‘red herring’ component to the crooks’ routine. In other words, KillDisk still cripples the data of a contaminated entity – be it an organization, factory, bank or government body – but usually displays a ransom note to make it look like the adversaries are after money. Meanwhile, the threat actors seek to simply erase a target’s valuable records and harness some ransomware hallmarks as a smokescreen covering the tracks of their sabotage.

The troj_killdisk.iub iteration of the KillDisk pseudo ransomware is extremely stealthy when inside a compromised host. It is most likely to be deployed on a machine manually via sophisticated access abuse, such as RDP connection hacking or the use of software exploits. Then, the malicious code gets integrated into memory, wipes its files from local storage and renames itself to evade detection by commonplace security solutions. On the next phase, KillDisk overwrites a predefined number of Master Boot Record sectors and does the same to the first 2800 bytes of every file stored locally as well as on removable media. At this point, it skips some system-critical directories to ensure the computer keeps functioning. These include Windows, ProgramData, Program Files, System Volume Information and a few others. After a specified time interval, typically 15 minutes, the infection terminates four critical executables (csrss.exe, lsass.exe, wininit.exe and winlogon.exe), so the workstation will automatically reboot itself and won’t enter normal Windows interface any longer.

KillDisk in its current form is, obviously, a calamity to encounter. It sticks with scorched-earth tactics, so the plagued organization’s important records will most likely be erased beyond recovery. Again, its ransomware-like behavior is nothing but a distraction maneuver, so it’s strongly recommended to adopt proactive defense when it comes to avoiding this nasty malady. Data backups are still such a must.

It’s important to know that the KillDisk virus creates copies of your files and encrypts them. In the meanwhile, the original files get deleted. There are applications out there that can restore the removed data. You can utilize tools like Data Recovery Pro for this purpose. The newest version of the ransomware under consideration tends to apply secure deletion with several overwrites, but in any case this method is worth a try.

Verify whether KillDisk ransomware has been completely removed