Although the Windows infection dubbed the Hitler-Ransomware isn’t currently in active real-world rotation, a couple of its characteristics are quite disturbing and make the sample a more hazardous threat than the commonplace ransom Trojans. The malicious specimen that researchers were able to spot and analyze appears to be buggy. It causes the compromised OS to crash and deletes certain arrays of files.

Ironically enough, the Hitler-Ransomware strain most likely hails from Germany. This is one of the facts that security analysts discovered about it – the code contains some comments of the author in German language. The way this program operates is as follows: it removes the extensions of files in different system paths, pops up a warning message shown below, and insists that the victim decrypt their files by purchasing a 25-Euros-worth Vodafone Card and entering the “cash code” into the appropriate field. According to the alert screen, the user’s personal files will be irreversibly deleted in 1 hour – a progress bar at the bottom reflects how much time is left before this happens. By the way, there are quite a few spelling and grammar errors in the text, for example the word “Ransonware” and the phrase “Your files was encrypted”. 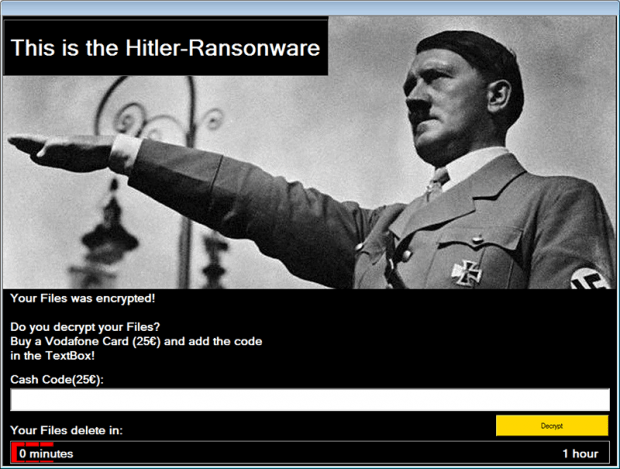 It turns out that Hitler-Ransomware creator’s literacy is not the only indication of unprofessionalism. There is nothing to decrypt, because encryption didn’t actually take place. As mentioned above, the Trojan wreaks havoc with data by erasing file extensions instead. When trying to open one of these skewed objects, the victim gets “The file could not be found!” message box. Furthermore, after the 1-hour deadline expires, the offending application makes the host operating system crash by forcibly ending csrss.exe process, which stands for Client/Server Runtime Subsystem. The Blue Screen of Death that appears as a result of this weird interference will persevere until the compromised person performs a manual reboot. This will be followed by a yet more bizarre encounter: the underlying malicious process named firefox32.exe runs and automatically obliterates all files located inside a specified directory, most likely UserProfile.

It’s difficult to grasp why the ransomware under consideration does all of these odd things. It dupes people into believing that it encrypted their data, while it simply messes with file extensions in fact. To top it off, it calls forth severe instability issues on the target system, which isn’t in any online extortionist’s interest. Another offbeat property of Hitler Ransomware is the fact it doesn’t rely on Bitcoin or any other anonymous cryptocurrency for payments, accepting prepaid payment cards instead. To summarize, there’s a discrepancy between the conventional ransomware routine and this particular implementation. If this cyber malady appears on a computer, the optimal troubleshooting avenue is to remove it and reinstate the data to its normal shape using the following steps.

It’s important to know that the Hitler-Ransomware virus creates copies of your files and encrypts them. In the meanwhile, the original files get deleted. There are applications out there that can restore the removed data. You can utilize tools like Data Recovery Pro for this purpose. The newest version of the ransomware under consideration tends to apply secure deletion with several overwrites, but in any case this method is worth a try.

Verify whether Hitler-Ransomware ransomware has been completely removed