Ransom infections locking mobile gadgets aren’t a new encounter, but with the recent emergence of the Cyber Police virus things have gotten worse. The distribution range of this Android ransomware covers multiple countries, where the malicious code determines one’s geolocation and presents lock screens in the respective language. To unlock the device, obviously, victims are told to pay up. Learn a way to circumvent the payment part and get rid of the threat.

According to the latest Android malware watch reports, an app claiming to act on behalf the Cyber Police National Security Agency is occupying the top positions. This virus masquerades itself as a piece of software, most likely BaDoink, which may accompany other downloads via a popular bundling technique. Having been installed, the malware configures the victim’s phone to display a screen stating that some sort of law violation has been detected. Effectively, this persistent screen paralyzes the operation of the gadget as it cannot be closed by means of any standard workarounds, therefore the user ends up being unable to access the contacts, programs, widgets, gallery and other personal data and features. 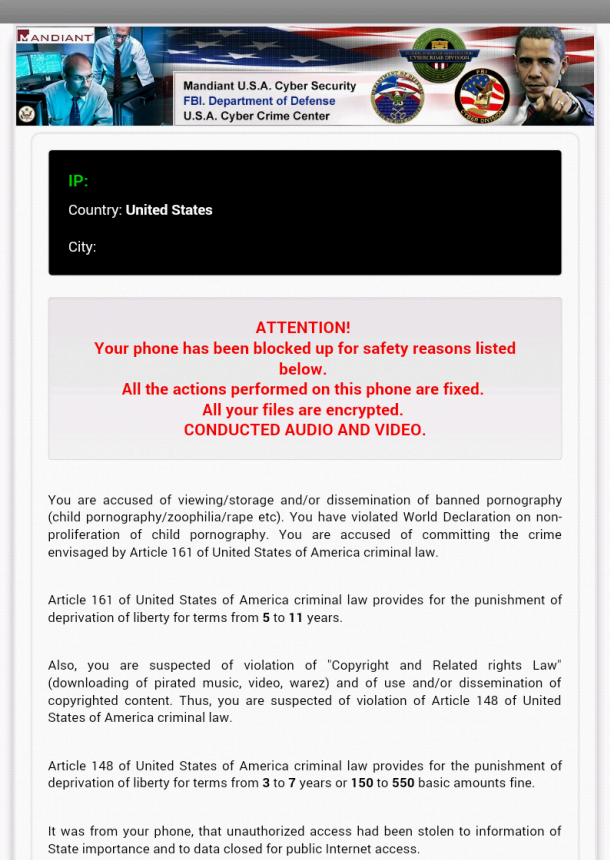 The rogue message displays the amount of time remaining before “the case file will be transferred to the court”, with a scary-looking built-in clock counting down the time left from the original 72 hours, or 3 days. It also says “Attention! Your device has been locked up for safety reasons listed below”, with the entirety of framed up abuses listed. To be more persuasive, the Cyber Police virus shows the wrongfully accused offender’s information, including their IP address, country, region and city.

The extortionists promise to unlock the phone on the following condition: the infected person is required to pay a fine in the form of an iTunes Gift Card worth $100 or through the Ukash system. Those who have confronted this mobile cyber threat should be aware of one key thing: mobile ransom trojans are not as severe as ones designed for computer operating systems. Luckily, the Cyber Police virus does not encrypt personal files stored on the gadget, and it turns out it can be eliminated in several steps.

What you need to do is uninstall the application that’s causing trouble. Obviously, the lock page prevents you from doing this, so it’s recommended to do the following:

2. Now tap and hold the option that says Power off. Depending on the vendor and the phone model, the methods can vary. If nothing happens as a result of the above manipulations, power down the device, then press and hold the Volume Down button when it’s startup back up.

4. When you are in safe mode, the Cyber Police lock screen will not be displayed. Go to Settings and select Apps

5. Look down the list of programs and locate a suspicious one that was recently installed. It could be an object named BaDoink, a bogus Adobe Flash Player app, etc.

6. Tap the possible offending app and select the Uninstall option

7. Tap OK on the confirmation dialog to uninstall the virus

8. Restart into standard mode. The Cyber Police lock page should be gone. You might also want to consider installing a mobile security solution to prevent attacks of this sort in the future. No ratings yet.