Ever heard of the Chaos Computer Club, an association of hacktivists with German roots? Unless you are a security geek, you probably haven’t. A recent wave of email scams, though, has increased the average layman’s awareness about this community, except that it uses an abbreviated form of the name – the ChaosCC hacker group. Here’s a lowdown on this fraud.

What is the “ChaosCC hacker group” sextortion email scam?

Given the current state of the online fraud underground, it makes sense to distinguish tech-savvy cybercriminals from con artists whose skill set is limited to composing rogue emails and handling Bitcoin transactions. It’s the latter category that’s dominating the e-extortion landscape these days. One of such hoaxes circulating in August 2019 revolves around an impersonation of the ChaosCC hacker group, which is probably a peculiar way the swindlers have twisted the “Chaos Computer Club” phrase. The text in the subject line of these messages varies, but it’s typically either “Keep your secrets safe!” or “Security Alert. Your accounts were hacked by criminal group”. The gist of this stratagem is to fool the recipient into thinking that the password for one of their email accounts has been stolen and their device has been compromised. On top of it, the crooks claim to have accessed the camera and recorded the victim watching adult materials. 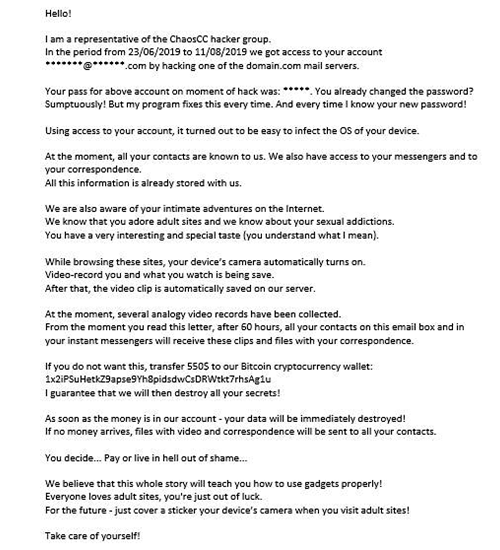 One more lie in the ChaosCC hacker group emails is that the self-proclaimed cyber intruders say they have breached the targeted user’s messengers and retrieved all correspondence along with the entire contacts list. By purporting to have this significant scope of access, the malefactors try to convince the victim that they have some embarrassing or otherwise incriminating content at their disposal and will send it to everyone the person knows. For more pressure, the felons provide a 60-hour deadline so that the user makes the “right” decision. What they want is a ransom amounting to $550 worth of Bitcoin. The bogus email includes the ne’er-do-wells’ BTC wallet address the victim is coerced to send the funds to. Once the cryptocurrency is received, the pseudo-hackers promise to destroy the stolen information immediately, otherwise a bevy of people will supposedly find out about the user’s little secrets compiled in a series of video clips.

Now that the idea is clear, it’s about time to debunk the allegations expressed in the ChaosCC hacker group email. First of all, although the sender indicates a password for one’s email account, possibly even a valid one, it doesn’t mean that the account was compromised in a targeted attack or that an email server was actually tampered with. It’s simply an upshot of a disappointing phenomenon called data breaches, where major Internet services fall victim to real hacker raids. As a result of these predicaments, personal information of millions of users may be leaked and end up in the adversaries’ possession. Having obtained this sensitive data, the trespassers usually upload it to Dark Web sources and allow fellow-criminals to access these dumps for a fee. Long story short, this is how the operators of the ChaosCC hacker group email fraud got your password.

Secondly, considering the fact that there was no real hack preceding the email, the felons are very unlikely to have infected the “OS of your device” with malicious code. This is outright bluff, and so is the assertion that the camera of the computer or other gadget has been manipulated maliciously. All in all, the crooks don’t have the contacts list from your email and instant messengers, nor have they recorded any videos of you. It means that the ChaosCC hacker group email can be ignored and safely deleted. However, in a small number of cases, this incident may stem from a prior malware attack – not the overarching one described in the message, but a surreptitious occurrence that could have given the fraudsters some clues that you are the right person to target with such a scam. Just to be on the safe side, consider checking your system for possible threats.

The extermination of “ChaosCC hacker group” sextortion scam can be efficiently accomplished with reliable security software. Sticking to the automatic cleanup technique ensures that all components of the infection get thoroughly wiped out from your system.

2. The scan will come up with a list of detected items. Click Fix Threats to get the email removed from your system. Completing this phase of the cleanup process is most likely to lead to complete eradication of the infection. However, it might be a good idea to consider ascertaining the email is gone for good.