The ubiquitous ransomware epidemic continues to dodge conventional defenses when plaguing users around the globe. The theme of code inheritance is in vogue with cyber extortionists for a reason. This way, they fine-tune their malicious programs to make them increasingly elusive and more difficult to crack. That’s what happened in early July 2017 with the emergence of a new BTCWare virus spinoff called the Aleta ransomware.

What is the Aleta ransomware?

As it has been mentioned, the Aleta ransomware is not an independently created strain. Its roots reach back to one of the most widespread file-encrypting malware families generically dubbed BTCWare. The revamped infection got some fresh makeup, namely the .aleta file extension concatenated to hostage entries and ransom notes named !#_READ_ME_#!.inf opening up with Notepad. The offending code sticks with the following file tweaking format: [original filename].[email address].aleta, so it’s a no-brainer to work out which data items have been ransomed. The email address preceding the strain-specific extension may be one of the following: darkwaiderr@cock.li, black.mirror@qq.com, blacklandfat@qq.com, roggers@bigmir.net, realsapport@bigmir.net, mail@aleta.cc, help@cryptmaster.info, payfordecrypt@qq.com, to name a few. 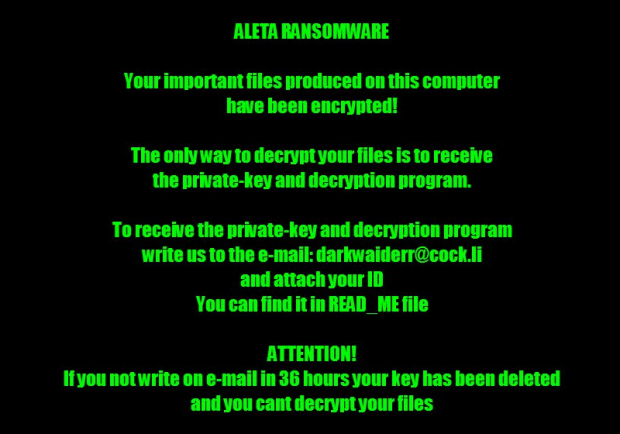 As a result of such a file-skewing routine, a document with the filename Essay.docx will change to something like Essay.docx.[black.mirror@qq.com].aleta, where the email string may vary. This change is only the tip of the iceberg, though. A much worse thing is that none of these files can be accessed – opened or edited – until the victim meets the threat actors’ demands. The cryptographic aspect of the Aleta ransomware circles around the use of two ciphers, AES-256 and RSA-1024, which blend crypto symmetry and asymmetry into a rock-solid fusion. It’s with the onset of this particular BTCWare edition that the crooks in charge have started utilizing the new uncrackable algorithmic take on victims’ important files. Previous variants had a flaw in this regard, which allowed researchers to decrypt them. Unfortunately, this has changed with Aleta. 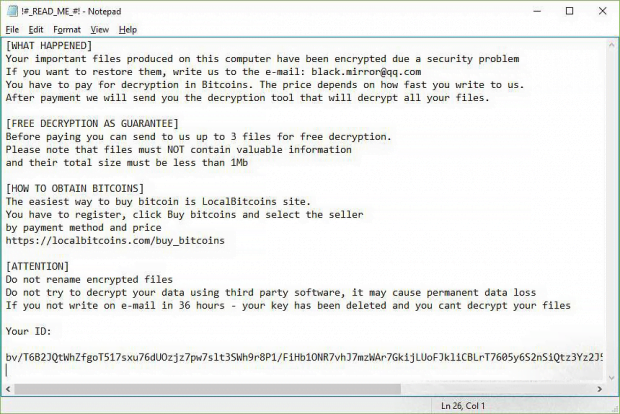 The attack chain makes this particular ransomware lineage stand out from the vast majority. Rather than infiltrate computers via trojanized spam attachments or exploits, the malicious process is executed manually. What makes such onslaughts possible is users’ unwise security practices. The breach takes place through remote desktop services that aren’t properly protected with hard-to-guess access credentials. In other words, the Aleta virus comes in via compromised RDP connections. Users should be doing a better job applying the corresponding authentication these days. Since RDP is a clever ransomware attack vector, perhaps it’s a good idea to disable it when not in use.

Having made it on board, Aleta scours the machine and mapped network drives for potentially valuable files. Each detected entry is subject to encryption. Then, the ransomware modifies the desktop wallpaper to the image above that says, “Aleta ransomware – Your important files produced on this computer have been encrypted.” The entirety of attack information and ransom demands is explicated in the above-mentioned !#_READ_ME_#!.inf document. The victim is instructed to reach the felons over email, attaching their personal ID to the message. The deadline to do it is 36 hours. The criminals will then send specific demands in response – they want 0.5 Bitcoin (about $1,100) for the private key. Before even considering the ransom option, though, be sure to try the recovery steps below.

It’s important to know that the Aleta virus creates copies of your files and encrypts them. In the meanwhile, the original files get deleted. There are applications out there that can restore the removed data. You can utilize tools like Data Recovery Pro for this purpose. The newest version of the ransomware under consideration tends to apply secure deletion with several overwrites, but in any case this method is worth a try.

Verify whether the Aleta ransomware has been completely removed